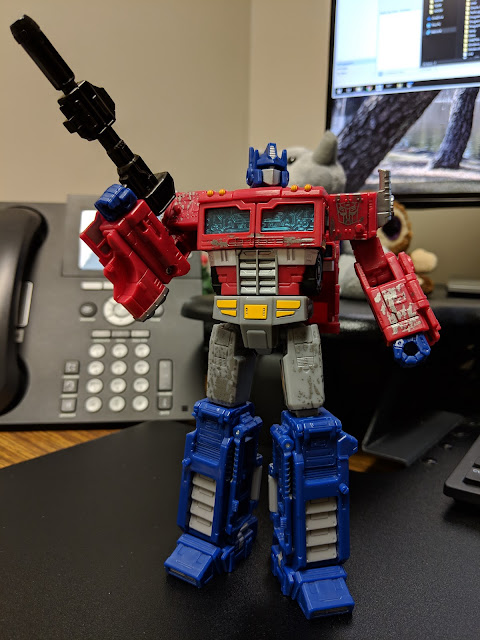 It seems like no more than a handful of months are allowed to pass before we are presented with yet another Optimus Prime toy. Be it from a new movie, new cartoon, or the latest video game, there is always an Optimus on the shelf.
Not that this situation is a bad situation to be in, being an Optimus Prime fan and all. However, as with all things quantity does not always equal quality... (I'm looking at you, Cyberverse.)

Every once in awhile though... A Prime to best all Primes lands on store shelves.
Enter Transformers War for Cybertron: Siege Optimus Prime. Yeah... That's a lot of words for one toy. 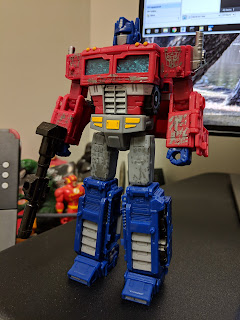 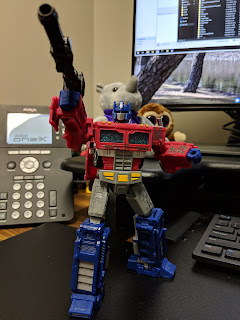 Siege Optimus, like all of the other characters in the line, is a very faithful throwback to his original G1 robot mode with a slightly modified Cybertronian vehicle mode.
The robot modes are where the Siege line really shines. Everyone is very well articulated and looks exactly like you would expect a G1 character to look. We all know the original G1 toys looked nothing like their cartoon counterparts.

Other than a small amount of kibble under his forearms and his backpack there is very little junk hanging off of Optimus' robot mode. You can't see if very well in these photos but I think his backpack looks quite a bit like the jetpack he borrowed from Sideswipe during an episode of the G1 cartoon. Works for me. Up, up, and away! 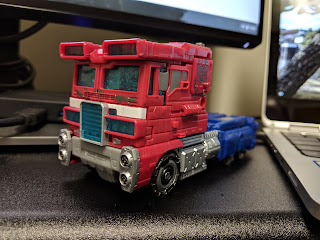 The truck mode reminds me very much of his original G1 vehicle mode despite having all of the little Cybertronian bits. It is very close to the same size and has that same boxy feel. I approve. I just wish he came with his trailer or if they sold one separately as a playset.

Thankfully it is becoming less rare to get a Voyager scale Optimus. Hasbro was hard set on making every Optimus Prime a Leader class toy. He was never that big in the G1 days so I am thankful for every Voyager Prime we get. In my opinion this Optimus is by far the best Voyager scale Prime we have received to date. He is as detailed and articulated as a Masterpiece toy and a heck of a lot cheaper.

I am looking forward to future waves of this War for Cybertron: Siege line. Every toy I have thus far is simply amazing. Gone are the headmaster gimmicks, the powermaster gimmicks, the combination gimmicks... Hasbro has finally given us a Transformers toy like that actually delivers quality (and not gimmicky) robots in disguise. I think it was very smart of them to move the gimmicks to the weapons and the battle master figures. Good job Hasbro. Now keep it up. ;)

Popular posts from this blog

So how does this work? Good? Bad? Why should I even use blogger these days? :)
Read more

December 13, 2005
I took the time at lunch yesterday to thow togather a website for my WoW guild, Istari. I found some really cool asp.net forums called Snitz . If you are looking for something like phpbb but can only use asp you should check it out.
Read more

A few months ago I dusted off this blog which I had not touched since 2011. The reason? I was prompted by an article written by Mike Elgan about how famed podcaster and internet host Leo Laporte was dropping social media all together. No Facebook, no Twitter, not even an Instagram. Leo retreated to the safety and security of his own blogs. A world totally under his control. That got me thinking about my terribly limited use of social media (i.e Google+) and why I even bother using it. My engagement on the once flourishing Google+ had all but dried up. I really only communicate regularly with three or four people on the platform these days. All of this lead me to examine the reasons I still bother to post anything to Google+ and the answers were pretty simple. The primary use? To share photos of our travels and grandpuppy with our family. The others? To read the news and to share and converse about things that I like and that matter to me. Then came the announcement that Goo
Read more